We’ve been using many swingers sites over the years, but we ended up using only two: aff (adultfriendfinder) and fullofdesire.

AFF is definitely the oldest and biggest one, but you have to pay a membership fee to be able to send messages. You have a chance of finding dates there, but only if you are a paid member. Another drawback of aff is that it is swarming with single males, many of whom don’t bother to send anything more eloquent than “wanna f…?’. We also heard that aff has filed for bankruptcy, so its days may be numbered.

That leaves us mostly with fullofdesire. The shortcoming of this site is that it’s new and therefore it does not have many members in every area. But that’s probably its only minus for us. The site is growing fast, we notice new local members every time we login.

We’ve had more luck finding couples and ladies here than on any other site. Here are a few simple rules that came from our experience and help us in our search: END_OF_DOCUMENT_TOKEN_TO_BE_REPLACED

We used to be on almost every facebook group for swingers. At first they all seem appealing as a potential source of new candidates to swing with. But very soon we realized that most of those groups are useless for swinger couples, whose main goals are to find other swingers close to them and to exchange info about events, clubs and resorts. Here are some of our experiences with such groups:

– They are usually infested by men pretending to be a woman or a couple.

– They are often not well moderated and therefore are full of spam.

– They are usually created by swinger web site owners or club owners or event organizers and are full of promotions for those companies.

– The functionality does not allow for genuine interaction with other swingers, unless you hook up with someone and then get off FB and communicate via email or IM, Skype, etc. We have only met 2 couples off FB, out of a few hundred profiles that we’ve been in touch with. Repeat: there is a disproportionate amount of fakes there.

– Most posts are not worth looking at and are waste of time (lots of spam too).

– In order to join such Groups, swingers typically create a separate, secret swinger profile on FB, that is separate from their regular vanilla profile. If you are not careful, mistakes may happen and your cover will be blown. Some of our friends have been compromised that way.

– Overall FB does NOT like swingers and often harasses them. But many ‘wannabe’ swingers on FB are to blame for that too, because they often behave in rude, vulgar and inconsiderate ways.

For all these reasons we stopped using FB swinger groups much, although we still belong to several. We check them once a month, may be, or less frequently.

Good specialized swinger sites are still the best way of hooking up with other swingers for us. We’ve had luck mostly with aff (paid) and fullofdesire.com (completely free for couples and women). Fullofdesire, for instance, has all the functionality of FB, minus the restrictions on nudity; plus the ability to search by location, which FB doesn’t have, and many more swinger-friendly features..

END_OF_DOCUMENT_TOKEN_TO_BE_REPLACED

Newbie couples are telling us that it is not easy to befriend another couple in a swingers club and have sex with them. Many complain about too many single males. Others say that a lot of club members are just voyeurs (they just like to watch) or exhibitionists (those who just have sex with each other while being watched). We went through the same thing when we started swinging.

First of all, if you don’t want single men, go on a couples-only night, you’ll save yourself a lot of frustration and wasted time. Secondly, you are right, there are many voyeurs and exhibitionists in clubs. Learn how to recognize them and keep clear of them. Thirdly, lots of couples do go to swingers clubs to get laid but very few make the first move, even if they like you. It’s a strange but common phenomenon. END_OF_DOCUMENT_TOKEN_TO_BE_REPLACED

We met this couple in a swingers club a few years ago when we just started playing with couples. It was one of those lovely places where the owner understood that fast loud music is not conducive to intimacy. The DJ played mostly slow pieces, so people on the dance floor and around could actually talk and hear each other. My hubby and I were dancing and we saw another couple getting close to us, brushing their bodies against ours. They were in their early forties, she was a curvy blond in a tight summer dress; he was short but well-built, with dark Mediterranean features. Soon I felt someone’s, not my husband’s, hand on my ass. It startled me at first but then I realized that the audacious touch was welcome… and I let the hand stay. When I looked around I saw that my hubby’s hand was groping the other woman’s breasts. I felt his hard-on pressing against my hips. All of a sudden I was breathing heavily as the stranger’s hand was caressing me more boldly under the skirt. Soon we exchanged dancing partners and the man was kissing me, holding me tight. END_OF_DOCUMENT_TOKEN_TO_BE_REPLACED 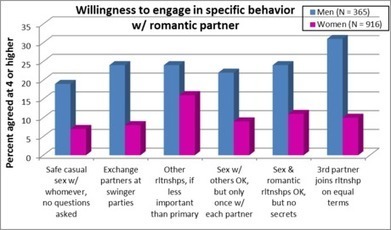 How many polyfolks are there? News media always ask, and no one really knows.

For instance, writes New York University sex researcher Zhana Vrangalova, recent research "has found that, among the general heterosexual population [of US adults], about 4 to 5 percent are engaged in some form of consensual nonmonogamy." That would be about 10 to 12 million individuals.

All the poly conventions, retreats and gatherings for the next 12 months 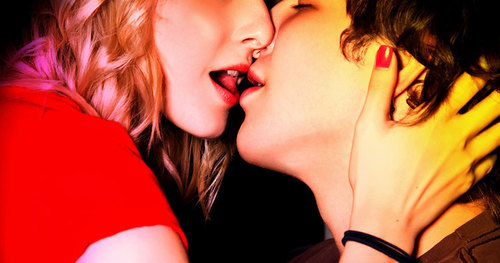 By the end of their dinner at a small Italian restaurant in New York’s West Village, Leah is getting antsy to part ways with her boyfriend Ryan, so that she can go meet up with her boyfriend Jim. It’s not that she means to be rude, it’s just that Jim has been traveling for work, so it’s been a while since she’s seen him. Ryan gets this. As her “primary partner” and the man with whom she lives, he is the recipient of most of Leah’s attention, sexual and otherwise, but he understands her need to seek companionship from other quarters roughly one night a week. Tonight is one of those nights, and soon Leah will head to Jim’s penthouse apartment, where the rest of the evening, she says, will probably entail “hanging out, watching something, having sex.” “She’ll usually spend the night,” Ryan adds nonchalantly, which gives him a chance to enjoy some time alone or even invite another woman over. He doesn’t have a long-standing secondary relationship like Leah (“I’ve actually veered away from doing that”), but he certainly enjoys the company of other women, even sometimes when Leah is home. “I like everyone to meet each other and be friends and stuff,” he explains. END_OF_DOCUMENT_TOKEN_TO_BE_REPLACED

Pubic hair is officially back
From what we are seeing lately at swinger parties and swinger clubs, the ‘shaving down there’ thing seems to have reached its peak and is finally starting to go away. We see more trimmed pubic hair as opposed to fully shaved. Frankly, I have never been a big fan of shaved bits. It’s too much trouble to maintain, and frequent shaving may cause irritation. Trimming is easier and, in our view, more pleasing to the eye compared to the ‘full bush’ or completely shaved skin.

Curves are back too!
We are also happy to see that women in swinger couples are no longer as obsessed with trying to be skinny as they were in the past years. Just look at the explosion of web sites showing how beautiful and confident ‘plus size’ women can be.  As part of this backlash, some new fast-growing fashion trends glorify curvy and voluptuous bodies. More over, certain blogs even started a movement stating that cellulite can be sexually appealing. END_OF_DOCUMENT_TOKEN_TO_BE_REPLACED

The game was simple: The man to perform oral sex underwater for the longest amount of time would win. What could go wrong? But one of the men popped up earlier than he should have. “He just went for 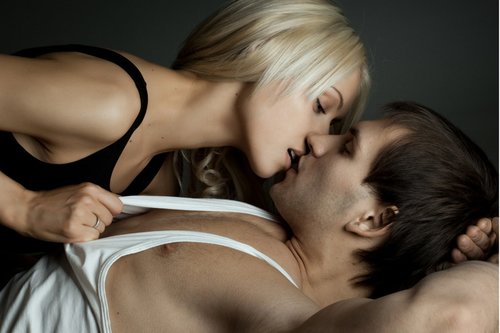 Cuckolding Turns These Husbands On Daily Beast While the average person may think the idea of sharing a spouse is horrific, the NASCA (North American Swing Club Association) estimates that at least 15 percent of married couples have opted for the… 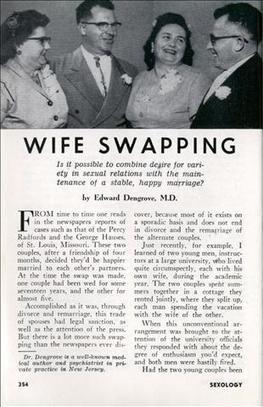 Is it possible to combine desire for variety in sexual relations with the maintenance of a stable, happy marriage?

FROM time to time one reads in the newspapers reports of cases such as that of the Percy Radfords and the George Hauses, of St. Louis, Missouri. These two couples, after a friendship of four months, decided they’d be happier married to each other’s partners. At the time the swap was made, one couple had been wed for some seventeen years, and the other for almost five.

Accomplished as it was, through divorce and remarriage, this trade of spouses had legal sanction, as well as the attention of the press. But there is a lot more such swapping than the newspapers ever discover, because most of it exists on a sporadic basis and does not end in divorce and the remarriage of the alternate couples. 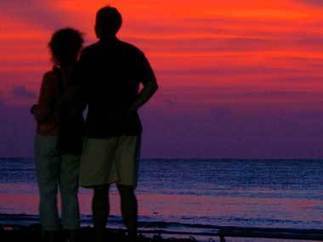 At least once a year we are informed India is in the throes of a sexual revolution. The word revolution itself has become promiscuous in its usage. But just because the Internet and cellphones make hooking up easier, does that a revolution make? 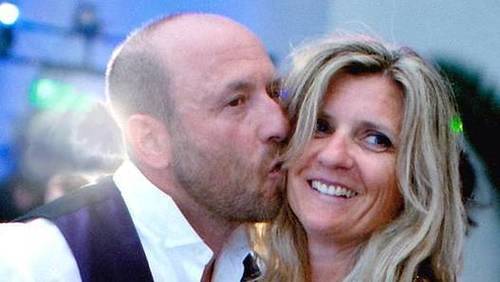 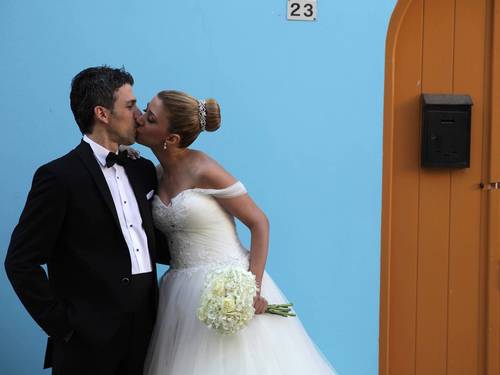 Allowing your partner to sleep with other people could be the key to a happy marriage, psychologists have claimed.

Allowing your partner to sleep with other people could be the key to a happy marriage, psychologists have claimed.

“Outsourcing” areas of the marriage such as sex to other suitors could make a relationship work in the long run, they argue.
For marriages in which the passion and intimacy has gone, Eli Finkel, from the department of psychology at Northwestern University in Illinois, advises embarking on an agreed “non-monogamous” relationship.